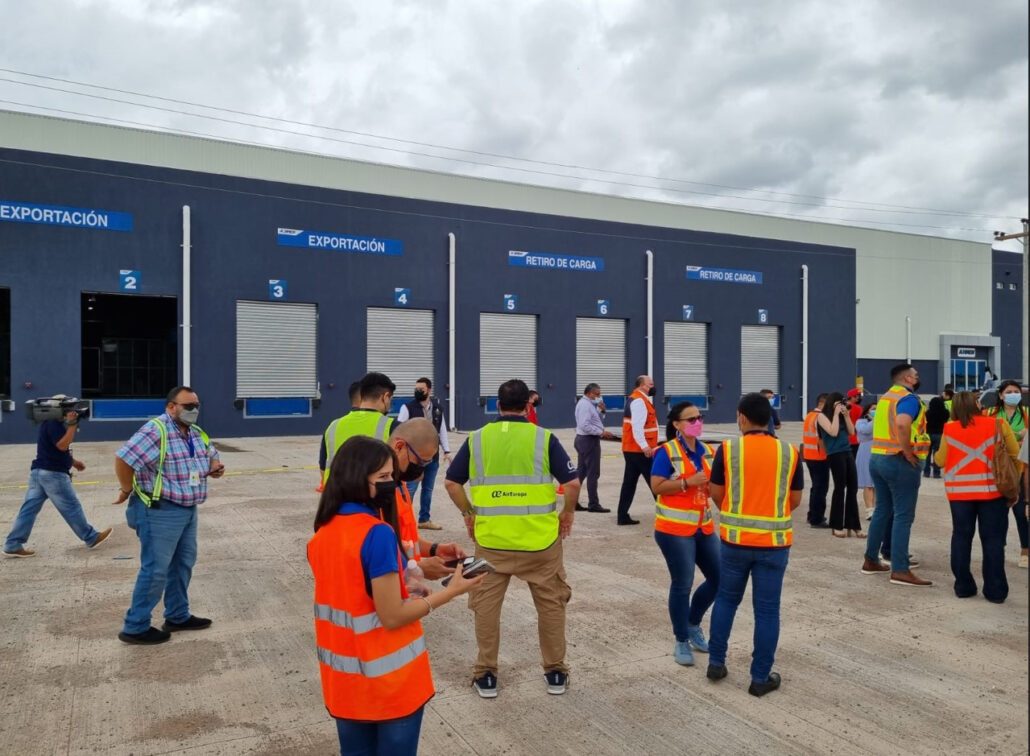 A new era in infrastructure and technology of the terminals air cargo to Honduras, imagine the representatives of various international airlines after knowing the facilities at the new cargo terminal at Palmerola International Airport.

According to the representatives of this sector, agro-producers will have an imminent awakening in export your products for the strategic position and the modernization of the terminal where it will be operated logistics level by Adimex, a Grupo Emco Holding company.

On an organized tour by Adimex authoritiesthe structures of the new terminal were presented, which is already under final construction and which will contribute to the relaunch of exports and imports of Center-South area.

Visitors could see the spaces that the terminal has had since then shelves, cold rooms, X-rays, area for dangerous goods, live animals, courier packages and customer service rooms of Customs and Adimex, among others.

The participants of the visit highlighted scale and technology that the terminal has and were eager for its operations to begin.

"We find them very technological and suitable spaces for cargo operations. As airlines we are looking new things and better processes. Let's hope with what we see here palm they are pleased. Undoubtedly, if everything goes well, this will be a big boon for exporters and agro-producers,” he said. Leonardo Sarmiento of the cargo airline DHL.

Other airlines like it Avianca, American Airlines, United, Air Europa, Rex Cargo, DHL, among other things, they got to know the place and expressed their satisfaction with the investment and the impact it will have on the movement of air cargo.

In the following days the authorities from Adimex and Palmerola International Airport They will have meetings with other sectors of the supply chain, such as agro-exporters, to introduce them to the new structures and the advantages they will have once operations are launched.

The new cargo terminal has a storage area for 3,000 sq m and 10,000 sq m of land only in its first phase, he explained Peter Fleming, Executive Chairman of EMCO Group's Airport Division.

"We are satisfied with this work, which has a $4.5 million investment and we hope it isBe operational at the end of August. We are excited because we know it will be a very important business model. export generate coin and also this terminal is another very important source of employment", Fleming noted.

In turn, Ronnie LeSage, CEO of Adimex, The logistics operator responsible for managing the cargo terminal explained in the presentation that the terminal is equipped with completely new and high-tech equipment.

We have five cars. Rapiscan X-ray (double view) to ensure speedy processes and ensure safety. We have also provided precision scales, a cold chain for import and export among others”.

Having a state-of-the-art WMS system which guarantees the traceability of the goods, from the moment they enter the warehouse until they are delivered to the customer or to the airline for their transfer.

"The SAP R3 - iLog system allows immediate integration with the Customs System in the mode of "Paperless Customs", which operates in together with the Honduran customs administration", She said.

"The terminal also has state-of-the-art equipment for CCTV for monitoring and surveillance real-time monitoring of the goods, which helps to ensure the safety of the goods customs and allows customers to be able to see the whole process of exporting your goods through the website ", LeSage said.

All available equipment will make the terminal Air Cargo Palmerola the most modern and best equipped in Honduras.

Exporters, importers and freight forwarders know the advantages that the Palmerola Cargo Terminal will offer