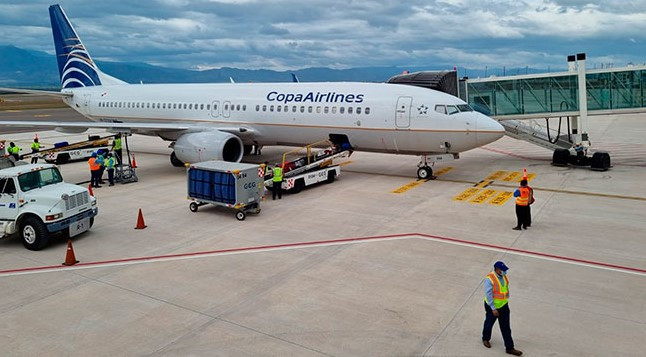 Copa Airlines Airbus 737-800 arrived on time at Palmerola International Airport on December 15 in Panama, marking the start of operations at the modern terminal.

This is the second airline to start operations at the new modern air terminal, which has seven seats and has the capacity to serve 13 aircraft simultaneously.

The flight arrived with 157 passengers, completely full, aroused the applause of the guests present at the event organized to receive the airline and who through giant screens could see the transcendental landing.

"We are excited to move our operations to Palmerola. This is the result of months of hard work with airport authorities to provide better service and greater operational safety at this new terminal," said Michael. Wehmeyer. . , Manager of Copa Airlines Central North America.

He assured that the airport will contribute to the consolidation of the country's airport sector.

On the same Wednesday, a Copa flight with 157 passengers to Panama took off from the Palmerola runway.

In total, the airline mobilized 314 passengers, between arrivals and departures, on the first day of operations in Palmerola.

For his part, Carlos Miranda, the mayor of Comayagua, said that with the opening of the airport, a dream come true that has been considered unattainable for many years.

"We are fighting to have this airport here and we are confident that it will bring development not only to Comayagua, but also to the entire central part of the country," the mayor said.

"Honduras needs this project to be more competitive. We should be proud and satisfied with such an airport," Miranda said.

Satisfaction with landing in Palmerola

The passengers and their relatives arrived very early to register with the Panamanian airline and were delighted with the speed of the proceedings.

"I had a very satisfying experience, a very safe landing and the attention was very effective, I am very happy to have had the opportunity to travel through Palmerola," said Dina Santos, a Honduran from Cuba.

"It's an honor for us to leave this airport, here we learned to fly and we wanted to have the satisfaction of being able to take off from this runway," said Joseafat Bernal, a young pilot who traveled yesterday through the new terminal. .

For his part, Peter Fleming, chief executive of EMCO Group's Airports Division, said the arrival of Copa Airlines is very important for the airport, which is already starting to serve several operations.

"We are happy because we are slowly starting to work and see the great achievements of the terminal."

He added: "We have received reports of the first days of activity and the success is total. There is still much to be done, but the first results are very satisfactory," he added.

Three more airlines are expected to arrive on December 16: Avianca, United and American.

Palmerola International Airport has confirmed that there will be a free ground transportation from Toncontín to Palmerola and vice versa for all departing and arriving flights.

At the same time, the first United and American flights arrive in Palmerola

Palmerola triples the number of passengers in central Honduras